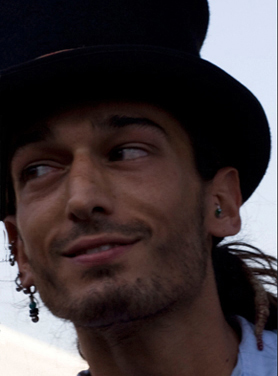 Due to a strong passion for circus arts and street theatre he starts his trainings in 2000, and in 2005 he decides –after getting a degree in Foreign Languages and Literatures– to take this way up professionally, working especially on juggling and equilibrium.

His professional training was based on constant practice and on the courses, stages and workshops he attended all around europe, in important circus schools or during juggling conventions and meetings. To complete his training in 2009 he decided to enter the Atelier Teatro Fisico Philip Radice, Turin, where he graduates in june 2011.

In the meanwhile he also begins to manage events linked to street theatre and to teach circus disciplines in Italy and abroad, without for this reason stopping his main and favourite activity of circus performer that brings him to perform in squares, theaters and stages all over the world.

In 2013 he sets up the Compagnia Scatola Rossa, who in the same year wins the contest "Cantieri Di Strada", a very important award in Italy for street theatre. As a solo artist too he goes on performing and winning prizes in Italy and abroad, like the critics award in the "Festival Strabilandia 2011" (Italy) and the second prize in the "KleinKunstFestival Usedom 2015" (Germany).